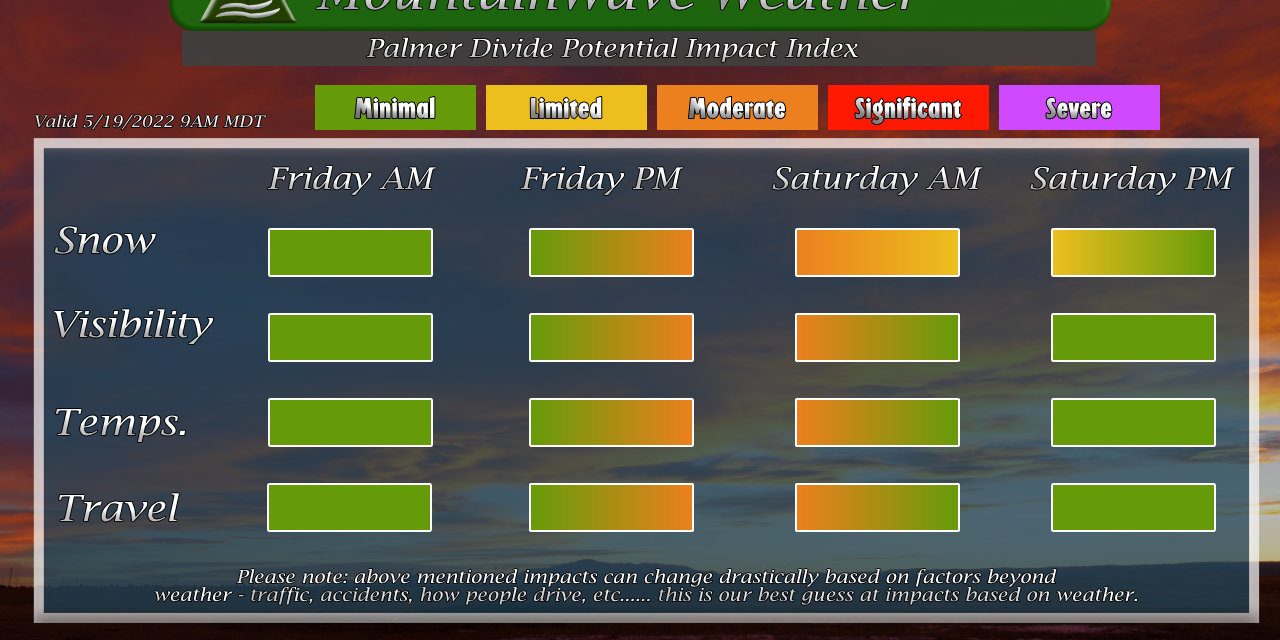 Lots to talk about this morning, I've got an updated snowfall forecast, information about what will likely be a Hard Freeze for Saturday and Sunday morning and updated weather highlights issued by the National Weather Service.

* Winds...West 15 to 25 mph with gusts up to 40 mph.
* Relative Humidity...As low as 11-15 percent.
* Impacts...Any fire that starts will have the potential to spread rapidly. Avoid burning or any outdoor activity that may produce a spark and start a wildfire.

Confidence is increasing in moderate to heavy snowfall in the Front Range mountains and foothills, mostly above 7000 feet and primarily along the eastern slopes, late Thursday through
Saturday morning. There is still a lot of uncertainty in snowfall totals but significant impacts seem likely, especially to mountain travel.

* WHAT...Snow expected above 8500 feet. Total snow accumulations of 5 to 11 inches. Winds gusting as high as 35 mph.
* WHERE...Elkhead and Park Mountains.
* WHEN...From midnight Thursday night to 6 AM MDT Saturday.
* IMPACTS...Travel could be very difficult. A detailed map of the snowfall can be found at: www.weather.gov/gjt/winter.

The snowfall forecast is a tricky one, the highest confidence I have with the snowfall numbers below are with locations above 7,000 feet in elevation or so. Those areas will have colder air and will most likely see a transition to snow quicker along with quicker accumulation on the ground. Areas between 5,500 to 6,999 feet are at about medium confidence at best - the big questions still remain; when does the rain/snow transition occur, how warm the ground is will be a factor and how much melting we see before accumulation. Anything below 5,500 feet in terms of snowfall is lower confidence, if those areas are showing no or little snow accumulation that information looks good, but lower elevations with higher snowfall accumulations predicted - I'm still not sitting well with those.

For the Palmer Divide, snowfall accumulation amounts have been adjusted upwards but I have kept the ranges a bit broad because I like the lower ranges to be there just in case we see more melting... additionally the amount of snow you get in these areas will depend on your elevation and the temperatures. All of those could vary drastically within just a few miles of eachother, so I think the broader range showcases the medium confidence in the number, but also accounts for differences across terrain.

Northern Colorado's main trend is with the colder air now forecast, snowfall amounts have been adjusted up for the areas West of Interstate 25. Into the mountains and foothills, snowfall amounts have been adjusted upwards, some favored areas in the high country could see between 20-30 inches of snow. If you have travel plans up in that area Friday and Saturday, keep in mind this will be a rather large storm and road closures and serious travel impacts will be likely. Many of those areas are under the Winter Storm Warning posted at the top of this article.

For the rest of the mountain locations, focus on heaviest snowfall remains along the Continental Divide. Snowfall amounts in those areas continue to trend upwards so the adjustment has been made on our end. The colder air and ample moisture will really help turn out the snow in those areas with some favored areas along the divide seeing 2+ feet of snow. This will be heavy, wet, spring cement and will create a lot of slush. Difficult travel conditions should be expected in these areas Friday and Saturday.

How About Some Lift?

I'll discuss the cold temperatures next, but I want to focus on the main drivers of lift with this storm since it will be important to how much snowfall we see.

The main driver of our moisture and also lift will be the setup of a surface low in a favored position somewhere over Southeastern Colorado/Northeastern New Mexico. You've seen these before, they're often responsible for pumping a ton of moisture up into our area and contribute to some of our larger snow storms in the winter months. It is crucial to have this moisture transport in place that taps into Gulf Moisture and sends it up into Colorado.

This feature also turns winds out of an Easterly direction which transports the moisture up along the terrain, as the air rises it condenses and forms water droplets or snowflakes. This "upslope" is another important component to a bigger storm that produces a lot of precipitation.

This is a really science-heavy term, but basically this means lift due to strong temperature differences or pressure differences due to the jet stream. In our case for this storm, we expect to see this strong source of lift over the front range due to the jet being overhead. This is a feature that creates "snowfall banding" along the front range, if you are caught underneath one of these areas it can mean you see heavy bursts of snowfall. It can often complicate forecasts as well because it generally occurs over relatively small geographic areas. 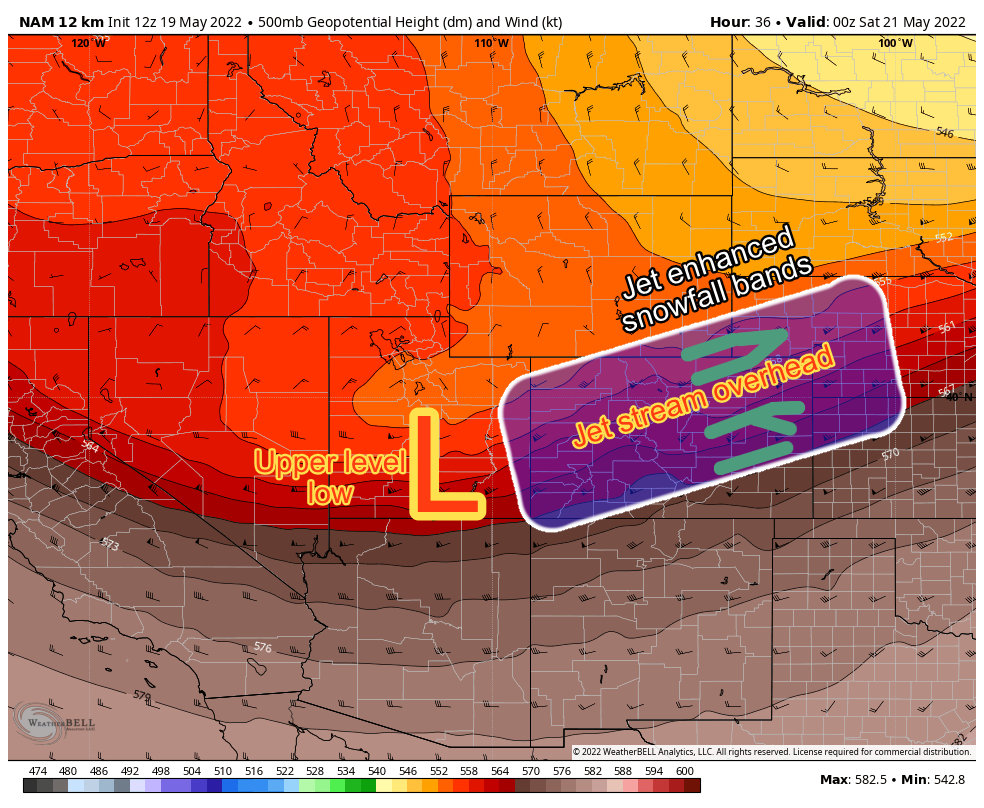 There's a lot to CSI and it's a topic I could bore you with all day, for now I'm trying to keep in simple and relevant for this storm system.

What Does This All Mean?

Lots of good things if you want to see a larger storm system perform.

This last piece is crucial to how much snow certain areas see and for right now is one of the biggest wild-cards. A few degrees warmer and most areas will see more rain and less snow, meaning the snowfall forecast would bust significantly lower than what you see now. A few degrees colder and we would see some of the higher end (read crazy) snowfall totals predicted in the models.

For this snow storm to work, the cold air needs to match up with when the moisture is falling for the best result. According to the models this will be the case, hence why you see snowfall forecasts moving upwards over the past few days.

One other thing to keep in mind is the likelihood of not only Freezing but Hard Freeze conditions on Saturday and Sunday mornings.

Here's what the models say: 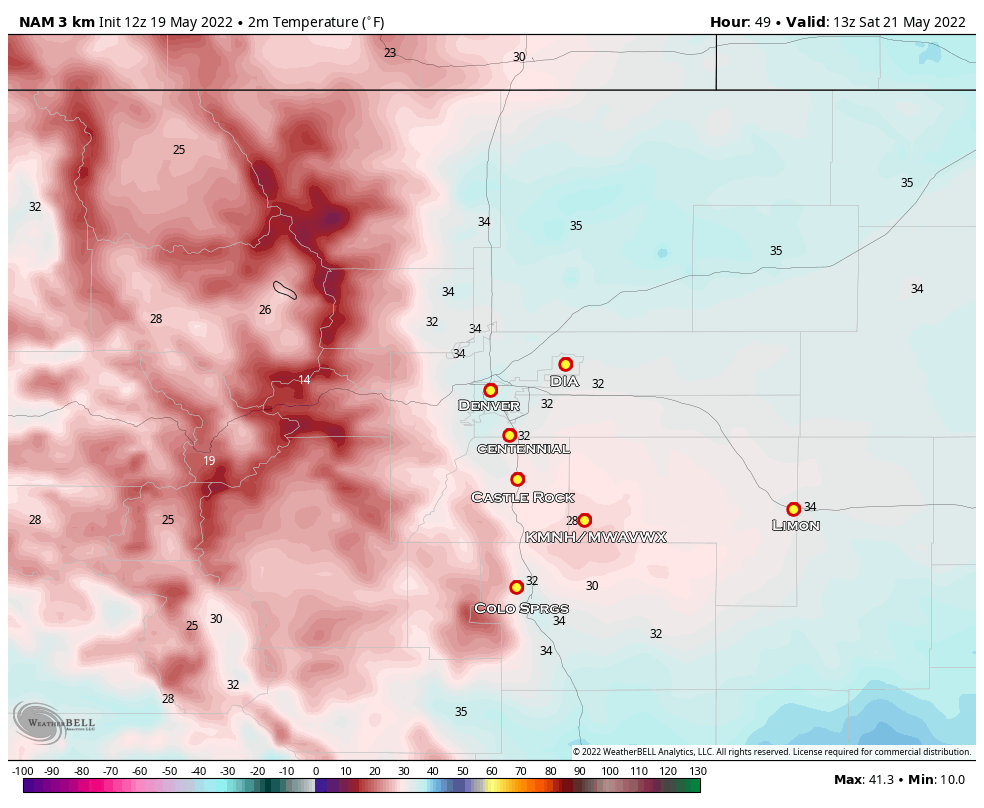 Temperatures along the Palmer Divide look to be in the low 30's for most areas with some scattered pockets of upper 20's. At least a couple of hours of freezing conditions are expected so expect impacts to any plants you have in the ground and any above ground irrigation systems. Please note, this model (NAM) is warmer than some of the others so temperatures could actually end up a bit colder than this. The Euro actually has temperatures in the mid 20's for several hours across the Palmer Divide, this would constitute a Hard Freeze 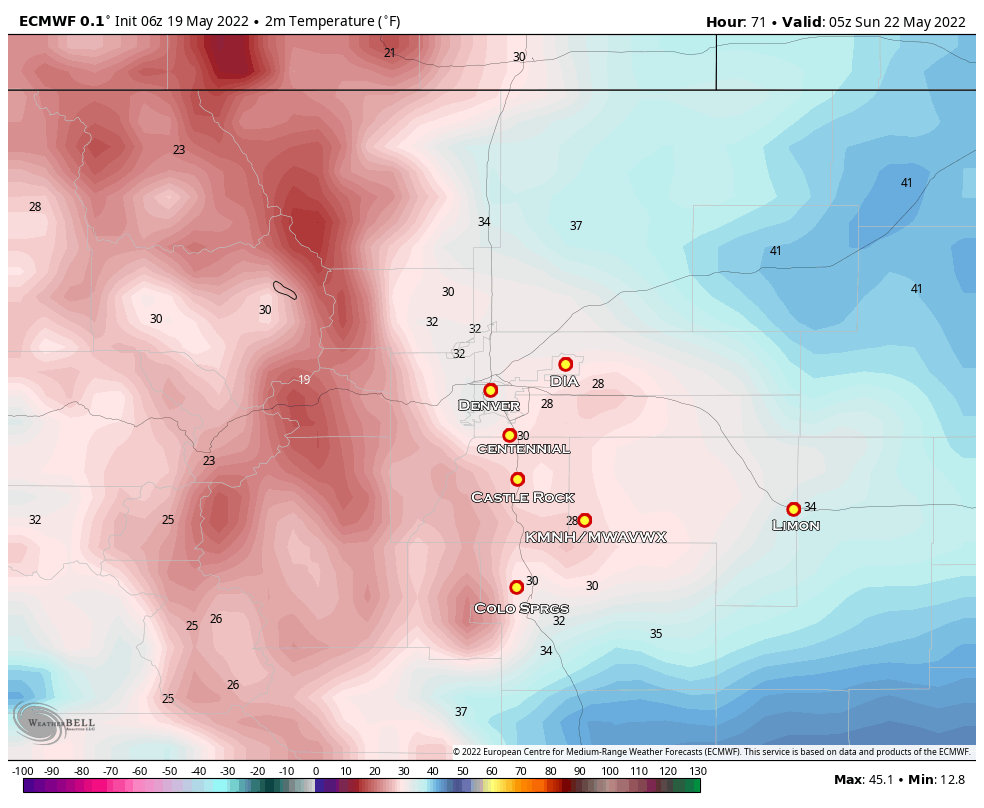 Freezing conditions are again expected overnight Saturday and into Sunday. Temperatures may be a smidge warmer if cloud cover is present or a bit colder if we get clear skies.

Here's where we are with the need to knows with this storm:

Currently in the Preparation Stage: make all cold weather preparations by late Thursday night. This includes any ranch/ag interests and animal care

Heavy Snow Possible: be prepared for difficult travel conditions and high snowfall amounts should models verify with this storm

Freezing/Hard Freeze Likely: make sure your above-ground irrigation systems are prepared. Any plants/gardens will need to be covered

As always, I'll have more updates as needed. 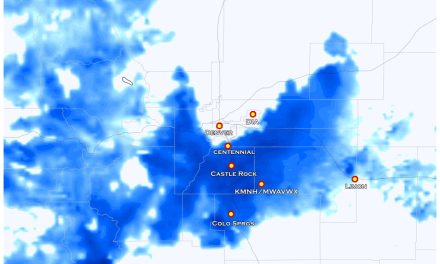 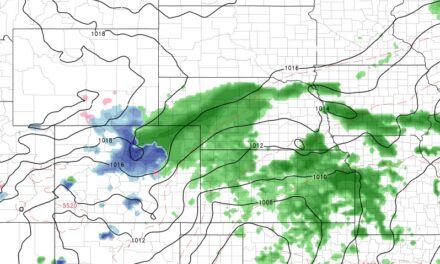 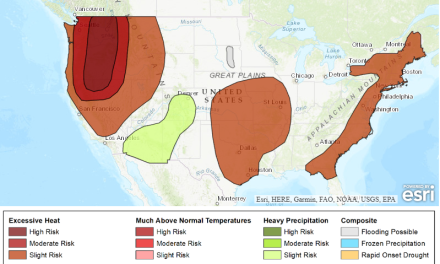