Despite not having the ability to mount the weather station on the car quite yet, I was able to put it in a favorable position for a short test ride. The purpose of this field test was not to collect a lot of data or accuracy of anything quite yet, it was mainly to see if and how everything works together. As such, the temperature/wind/dewpoint etc... data readings were not quite accurate from a reporting stand point but they seemed to work well nonetheless. The GPS tracking worked quite well also, there is still more work to do on the conversions but I like the initial results.

I would say the result of this very early field test was a great success!

When plotted on map online, here is the results. Eventually this map plotting feature will be in the software itself but this is a later feature. 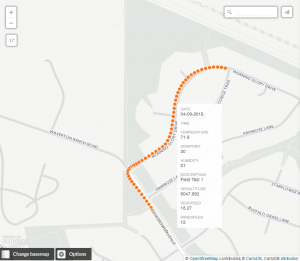 This week I will continue to work on finishing all the conversion so the data comes through in a decent format (MPH instead of Knots) and a few other cleanup items. I am also beginning work on the UI and how it should act and look. I will also have another field test or two this week. Stay tuned, exciting things are happening!

I've officially taken to using this as a header image for the web pages dealing with this project on the site here. I will probably make a proper banner for the website but in the meantime, this is the loading screen users will see when they launch the software.

Not too shabby if I do say so! I may keep it for the final versions or may change it as the software develops.