There's a lot going on this afternoon as our forecast continues to evolve, models have still been very consistent with snowfall which is still puzzling at this point in time. Usually we see a bit of a drop off in the hours before the storm systems arrival and that helps us lean one way or the other with confidence in our forecast, but this afternoon data is holding strong on more snow rather than less snow.

As I've explained though, while snow falling from the sky is a pretty solid lock at this point, the major wildcard and puzzler with this storm is still how the ground temperatures will react and how much that allows snow to accumulate. By this point we usually have at least medium confidence in a snowfall forecast for a storm, but we are still down in that low confidence territory on snowfall numbers.

With that, let's give an over-encompassing look at the latest information as of this afternoon!

Accumulating snow will impact area vegetation causing damage to trees and possible power outages. Roads could be slippery and slushy. Overnight low temperatures Tuesday night will drop into the teens.

Travel could become very difficult. The hazardous conditions could impact the morning and evening commutes Tuesday. Gusty winds could bring down tree branches. Snow accumulating on trees which are still in full leaf may break additional tree branches.

Take steps now to protect tender plants from the cold. To prevent freezing and possible bursting of outdoor water pipes they should be wrapped, drained, or allowed to drip slowly.

Northern El Paso County the High Wind Warning is in effect from 9 PM this evening to 7 AM MDT Tuesday.

Damaging winds will blow down trees and power lines. Widespread power outages are expected. Travel will be difficult, especially for high profile vehicles.

People should avoid being outside in forested areas and around trees and branches. If possible, remain in the lower levels of your home during the windstorm, and avoid windows. Use caution if you must drive.

Phew! There's a mouthful! Remember if you're at certain locations along the Palmer Divide we have real-time and up-to-date weather warnings and alerts on our website! Look for it under the Palmer Divide Weather section of the website menu under the location and click on Weather Alerts.

As we get closer to the event and more model comes in we are getting a better picture of what the next 24-48 hours will look like and what to expect. Here's the latest play-by-play for what happens starting tonight.

The cold front is currently moving through Wyoming and will be entering Colorado shortly. Most models have the front moving through the Palmer Divide region sometime after 6-7PM and midnight. You'll know the front is moving through because of the wind at first, followed by the drastic temperature drops behind it and overnight.

Most models show the front moving through Monday evening with colder air filtering in overnight.

Strong winds will accompany the leading edge of the front, some areas could see gusts in excess of 50mph. Expect blowing dust Monday evening across the Colorado front range.

As we move into late Monday night and early Tuesday morning showers will form behind the front, initially as rain but switching over to snow. This is important! When the rain changes to snow will dictate what type of commute you will see in the morning Tuesday. An early change to snow means roads may get dicey earlier under heavier bands of snow... a later change means roads will probably be fine Tuesday morning.

We will have to see how that goes as no models agree on an exact time on switchover from rain to snow...

The Nam3k shows a change-over to snow along the Palmer Divide between 3AM-6AM Tuesday morning... but other models don't necessarily agree on that timing!

So expect those conditions to persist and depending on how quickly roads can be overcome and how temperatures ultimately end up; the possibility of a rough Tuesday evening commute is decently high at this point.

After a lull of snow in the evening some models show another burst overnight Tuesday into Wednesday morning. This burst may have the best chance of accumulating snow as temperatures will be very cold at this point!

Snow looks to come to and end sometime between 6AM and 12PM on Wednesday morning.

I'm still working on these and waiting for one more run of data to come in this evening. The general trend today has been for snowfall to go up in some areas and remain the same in others.

For reference, these were the totals I posted from last night for reference: 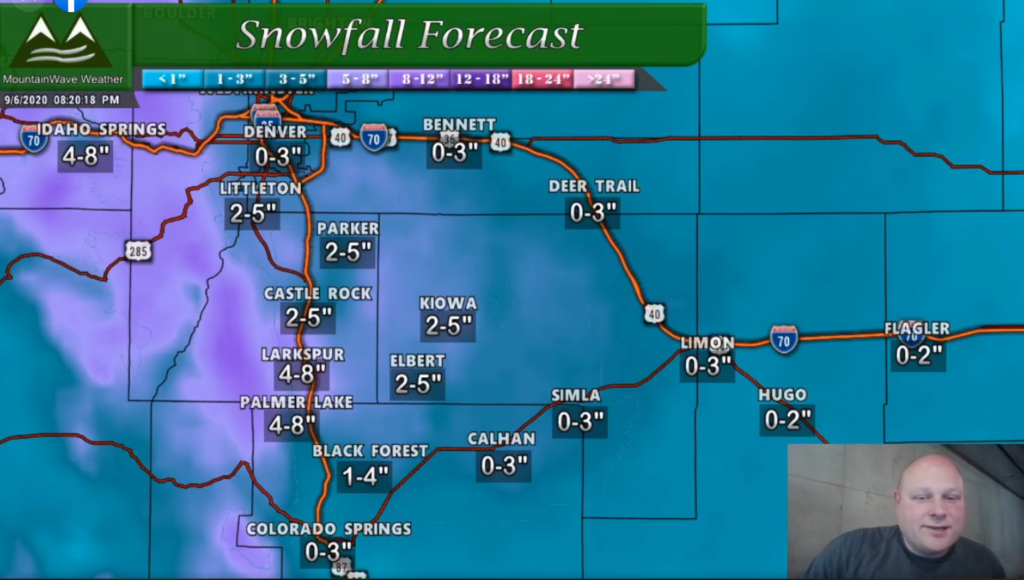 Snowfall totals from last night's Live Stream. Tune in tonight to my livestream for an updated snowfall forecast!

Look for an update tonight on my live-stream with these totals. At this point in time it most likely looks like I'll be adjusting these up slightly, but not majorly based on ground temperatures still being a big question!

That's what we see at this point, while the forecast is still evolving it's interesting to see how consistent the models have been with large snow amounts. It will really come down to either the models nail this and we get a lot of snow or they don't take the ground temperatures into account and bust way low on a lot of snowfall amounts. For now I'm airing on the side of caution and counting on warm ground temperatures to erode a lot of snow accumulation.

Either way, it will be cool to see how this pans out!

Be Sure to join my Live-Stream on Facebook tonight for a re-cap of this information, forecast discussion and updated snowfall forecast! Check out the facebook page for updates on when that will air! 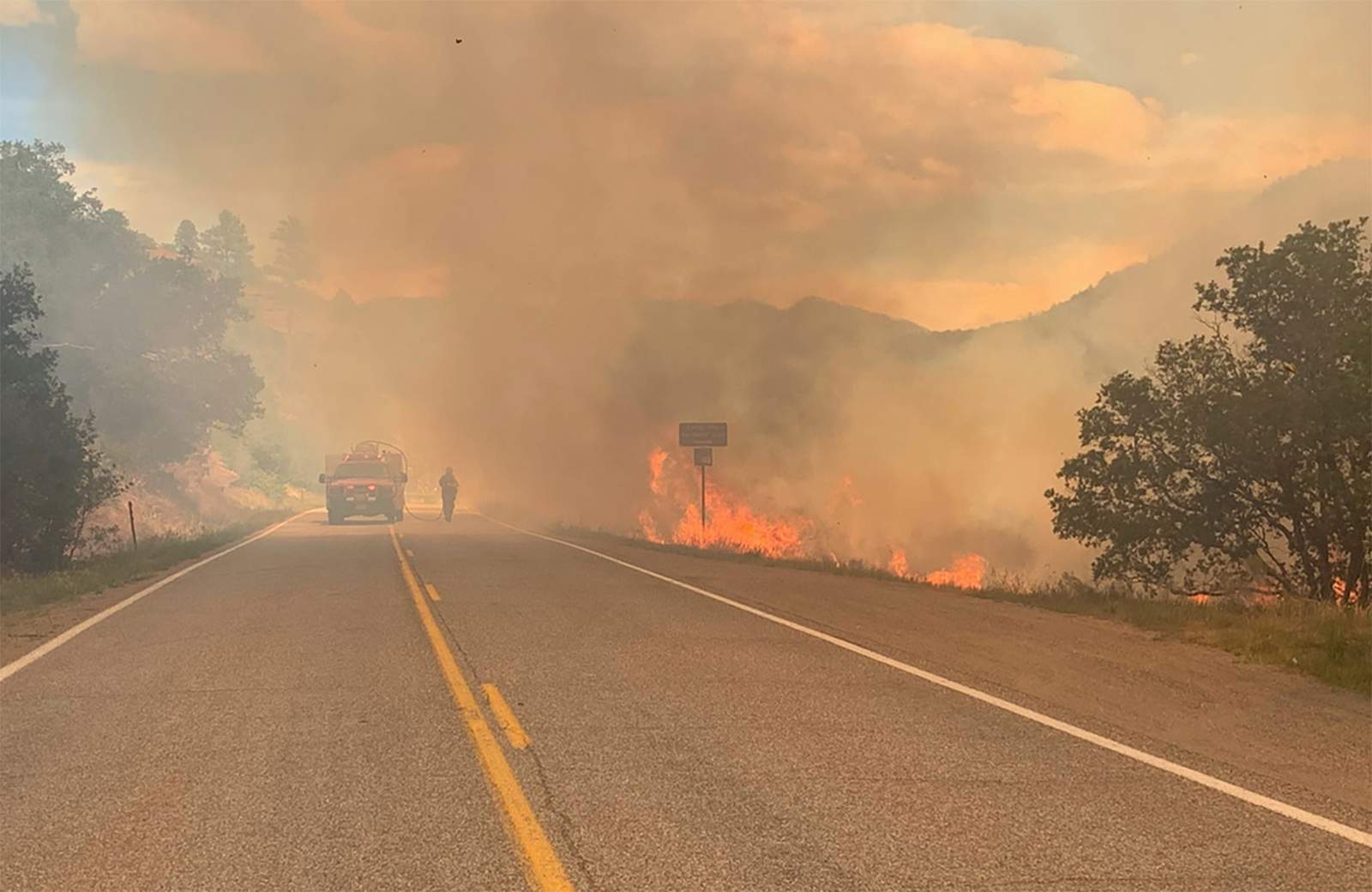