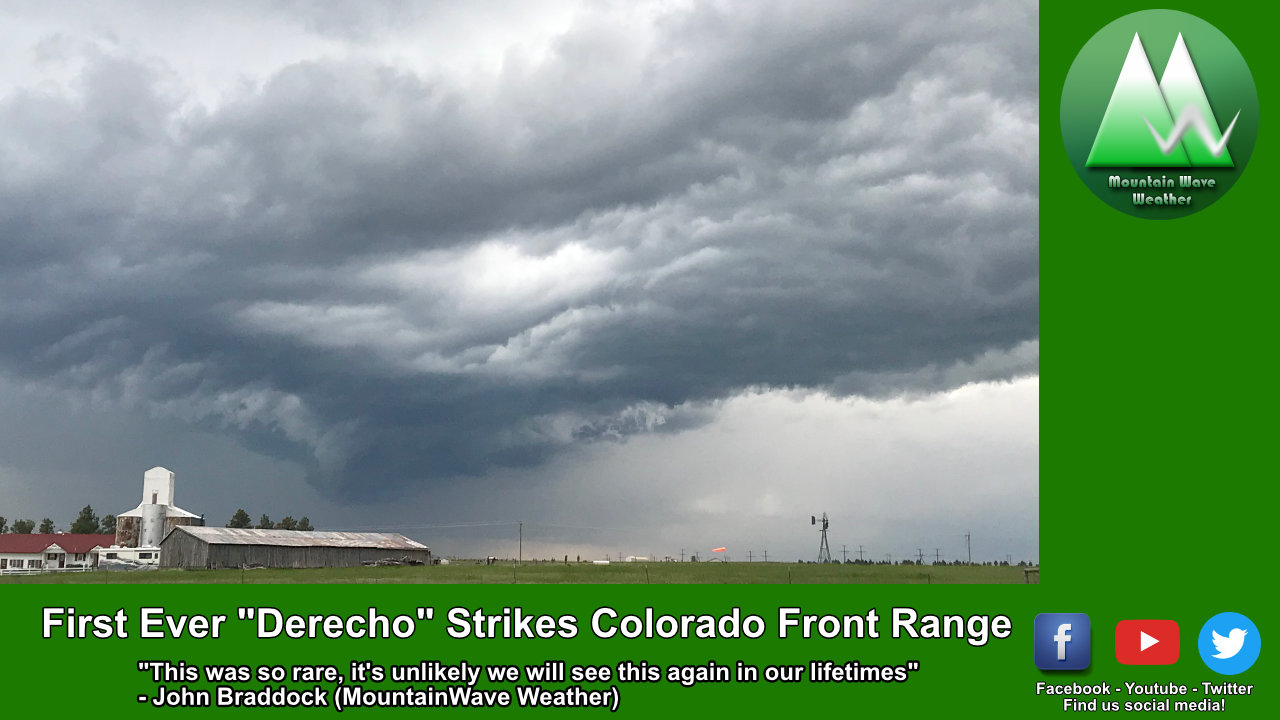 What is a Derecho?

A derecho (pronounced similar to "deh-REY-cho") is a long line of strong and damaging winds associated with thunderstorms. These thunderstorm complexes can be several hundreds of miles long and can last over several hours. They can be associated with squall lines or bow echoes, both of which are often seen features with a derecho. Derecho is actually a Spanish word that, in this context, translates to "straight-ahead" or "direct - which makes sense considering one of the main characteristics of a storm complex like this is the damaging "straight-line" winds that rush out of these types of storms.

Here's the breakdown on a few of those terms: 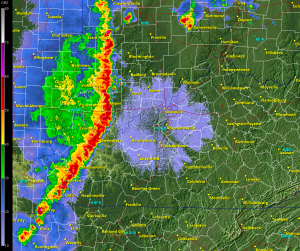 A squall line is a long line of thunderstorms that generally form along a cold front, dry line or some other atmospheric disturbance. They can be hundreds of miles long and generally result in hail, strong winds or heavy rain. Squall lines also have the characteristic of lasting for several hours. The difference between a squall line and a derecho is that 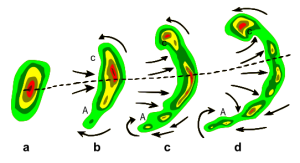 Bow echoes are associated with squall lines and are an area where the storms bow forward due to strong flow at the rear of the storm. A squall line can have one or more bow echoes (they are a smaller scale feature than the squall line itself.)

If you'd like to dive deeper into Derechoes, this article from the Storm Prediction Center is a great resource!

How Common is a Derecho in Colorado? Along Colorado's Front Range?

To say these things are rare in Colorado would be an understatement. While we are no stranger to smaller scale squall lines on the Eastern Plains of Colorado - a derecho is something we just do not see, especially in the Western and Central parts of the state... 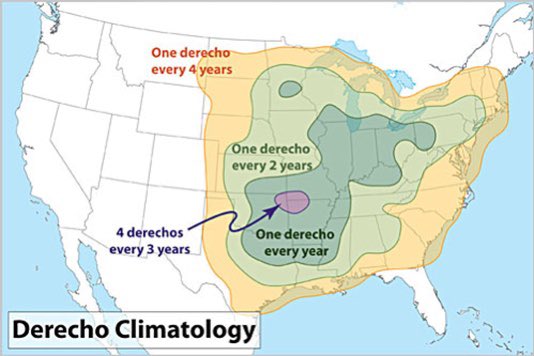 Derecho climatology - Illustration by Dennis Cain via the SPC Website

Those of you that follow along with us that originally lived in the mid-west are no strangers to these phenomena so you'll forgive us Westerners if we haven't heard/seen much about these before. In fact, on average many areas on the midwest will see a derecho once a year or every other year or so. As you travel further West to the high plains you may see on of these every 4 years or so... but as you move into Colorado/Wyoming/Utah they are completely unheard of.

In speaking to several Meteorologists around the area and a few folks at our National Weather Service office none of us could say we've seen anything like this along the front range as long as we've watched the weather. The Colorado Climate Center confirmed that this is the first recorded Derecho along Colorado's front range. These don't usually happen around here due to our dry air and because the mountains tend to shred smaller scale features (thunderstorms and such) as they cross the divide.

Suffice to say; you may never see another one of these along the front range of Colorado in your lifetime... that's how rare they are in this area!

Was it a Surprise? 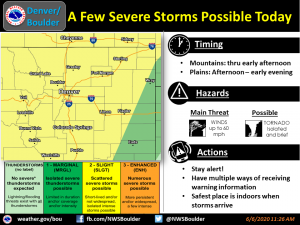 A lot of folks thing that the severe weather we saw on Saturday "surprised us," but that's not exactly the case. The Storm Prediction Center had a Slight Risk out for most of Colorado in the morning update. This probably had to do with the storm system cranking into Utah that was kicking of showers and thunderstorms in that area. So we were expecting severe weather possibilities for a lot of locations by late Friday/early Saturday and even the mode of severe weather was expected (high winds/hail/etc...)

We expected severe weather and we expected the primary threat to be hail... what we didn't expect was how we realized this severe weather. No one predicted we would have a derecho because it just doesn't happen in Colorado. 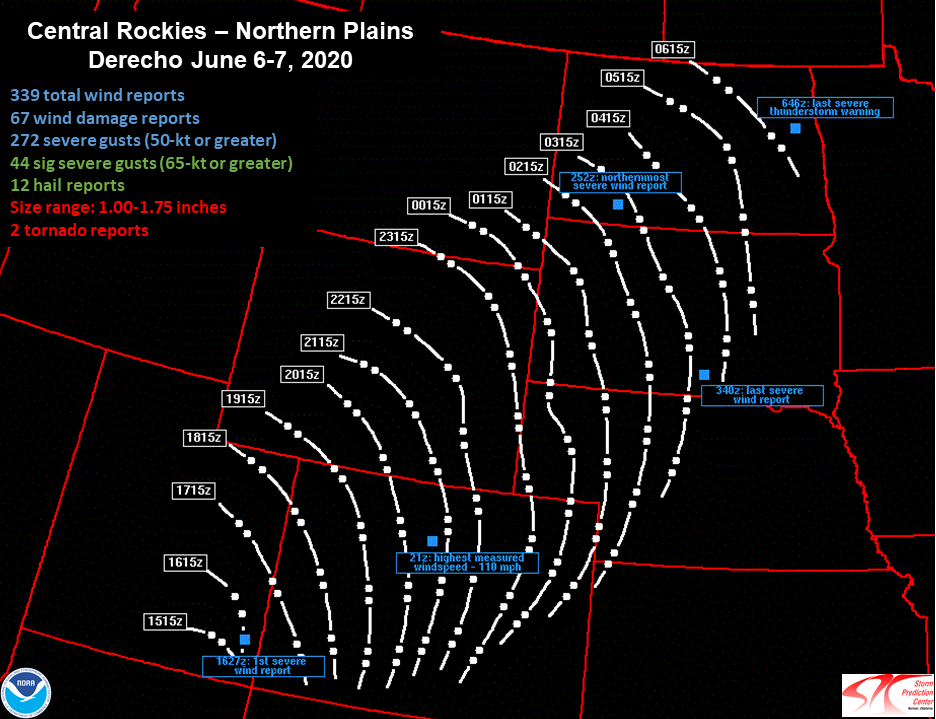 Here's a rough timeline of some interesting things that happened with this event:

Some of the severe thunderstorm warnings issued by the NWS office in Boulder were the largest on record by geographic area that they've ever had to issue!

Additionally, the Storm Prediction Center received some of the highest amount of damaging/severe wind gust reports since 2004. You can see a large number of them come from Utah, Colorado, Wyoming, Nebraska and the Dakotas.

Radar loop of Saturday's historic derecho in Colorado. It appears to break up a bit over the mountains, but that is just due to lack of radar coverage there. #9wx pic.twitter.com/USL5ZAxYut

Sattelite Imagery and lightning from the Derecho from Dakota Smith

Rare derecho stretching from Utah to the Dakotas today.

At one point nearly the entire state of Colorado and three quarters of Wyoming were under a Severe Thunderstorm Watch including a sizable chunk of Utah!

We all know how crazy of a year 2020 has been, this is just one more incredibly odd event we can add to the book. As someone who studies weather it was cool to see how everything came together and how it moved across the state and towards the Northeast. A derecho forming in Utah and staying alive across Colorado and beyond has to have so many ingredients line up just perfectly; as I mentioned above it's unlikely we see something like this again.

Hopefully everyone got to see it and didn't experience too much damage. 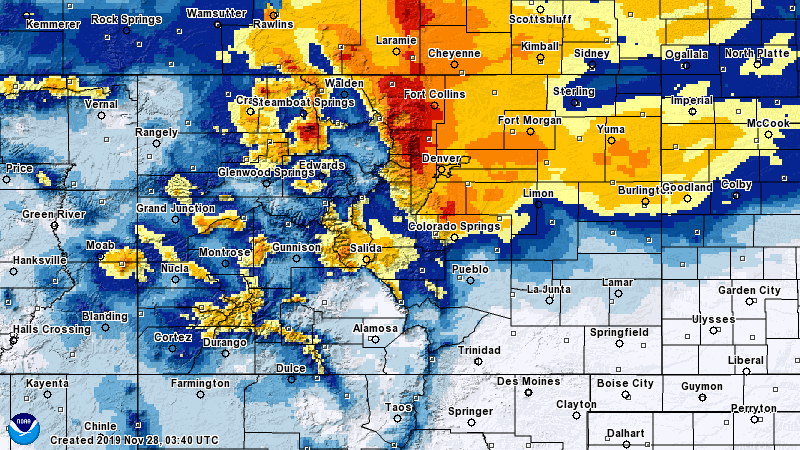 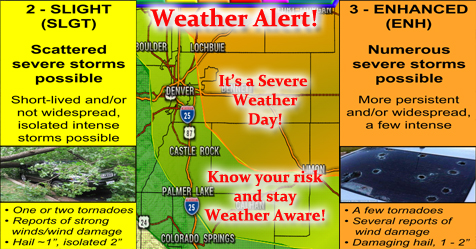 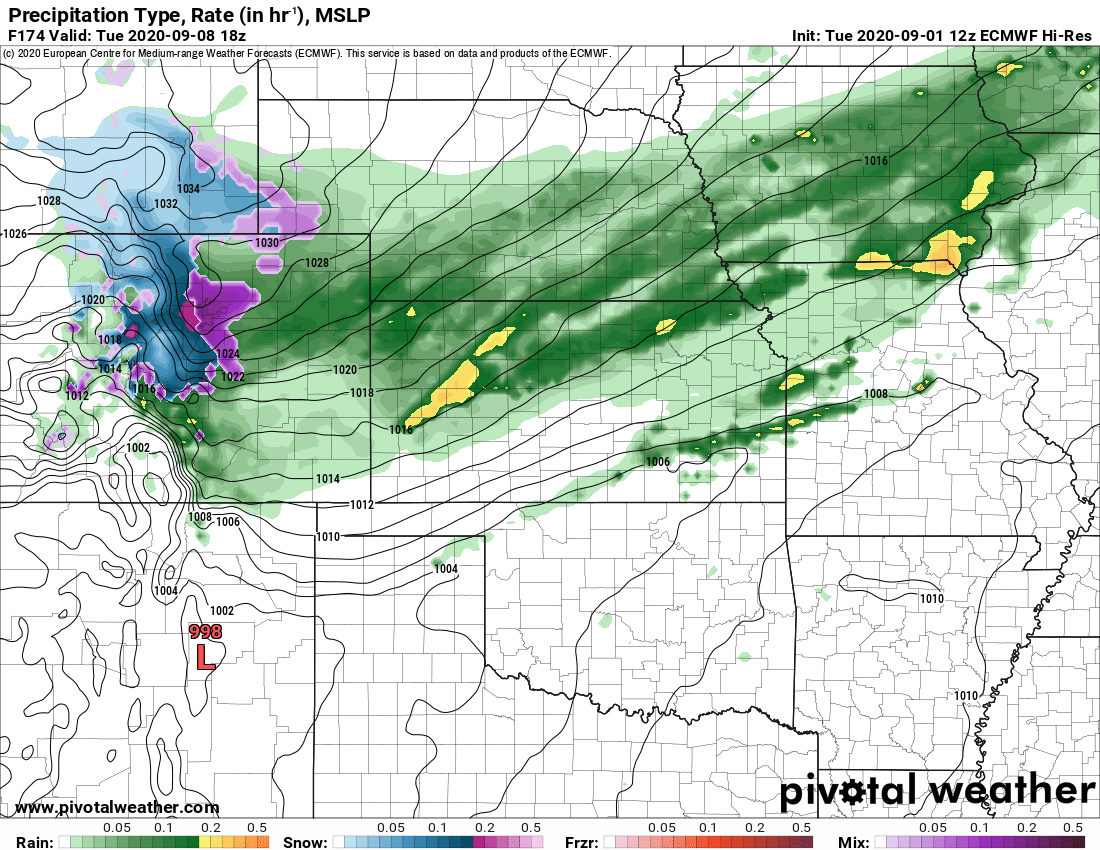