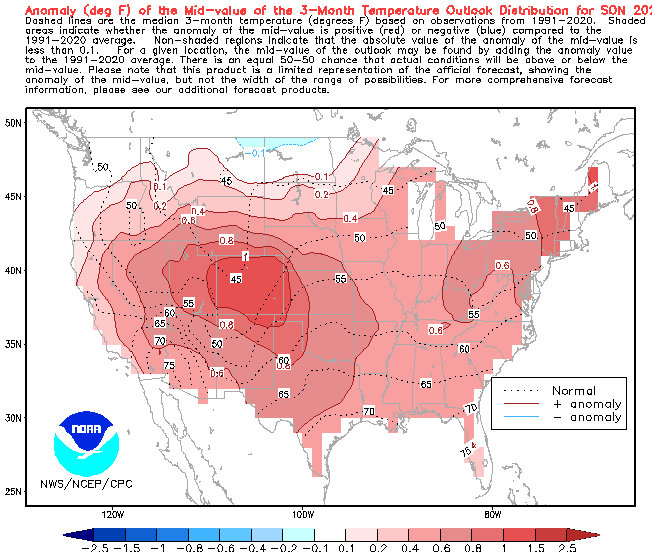 I've filled the first few sections of this article with some talking points about what we see hapenning in the atmosphere and with certain circulations going into this fall. This information is a great read if you're a weather nerd or just want to know a bit more about the global changes and patterns that we are watching - some of this goes into making a forecast for the Fall season in Colorado. If you'd rather just skip all of that and see what we are predicting for this fall season - our outlook is towards the bottom of the article.

A lot of folks are putting out forecasts for a season that are up to 90-120 days out. I've seen many articles talking about what folks "BELIEVE" will happen through the next 1 - 4 or 5 months, with quite a bit of detail. Here's the thing though, detailed forecasts beyond about 10 days over right around 50% accuracy... basically a coin flip. Anyone can do that and be right half of the time... I approach my long range outlooks a bit differently.

This Fall Outlook is simply that - an outlook. It is not a forecast, it is not meant to provide concrete details of what WILL happen. It is a series of data pulled together, patterns visualized and history scrutinized to arrive at a look at what is potentially more likely or less likely to happen. This is the only decent glimpse meteorologists can offer this far into the future; anyone claiming they can predict a major snow storm on an specific week in January this far out in time is selling something... and it's not anything good or useful.

As we enter Fall of 2022 we are in the midst of an ultra-rare El Nino Southern Oscillation event. For only the third time since we began keeping records on ENSO - we fid ourselves in the third consecutive year of La Nina conditions. Many folks have started calling this a "Triple Dip La Nina" which I believe is a pretty fitting name.

You can see from the chart below, not only is a triple dip rare but for the first time our third year of La Nina is the strongest out of the three. This has not exactly happened before that we have any data for. What does that mean for our ability to forecast this fall and winter season? Luckily we do have some data of years with a similar set up to this year's, but involves other factors outside of ENSO, this should help us make a pretty good educated guess. 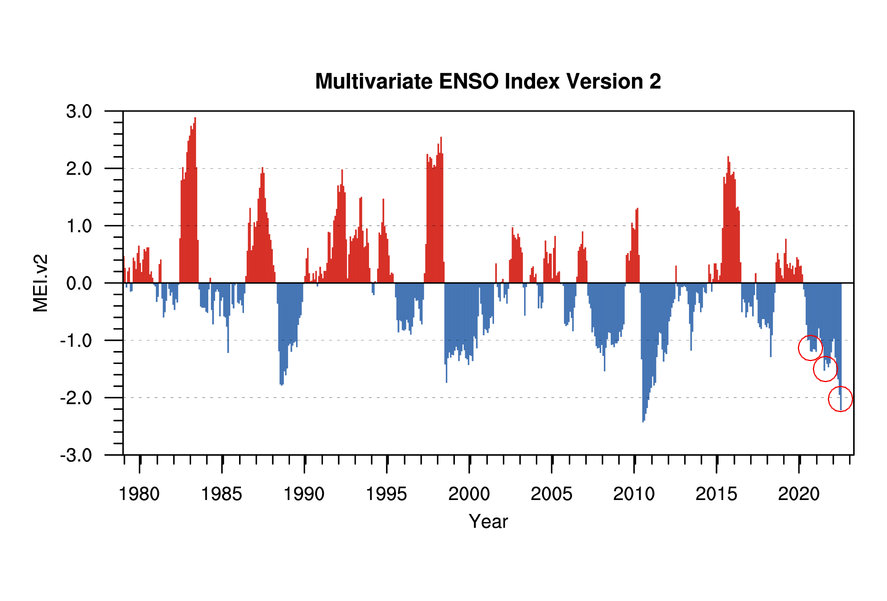 Does La Nina Break Down Early this Year?

It just might! Currently models are forecasting us to slip back into neutral conditions by later winter to early spring. This could be interesting to watch as it may set up the potential for return to "typical" late winter/early spring weather. This may mean we have to keep a close eye out for larger-scale snow storms and cold outbreaks. 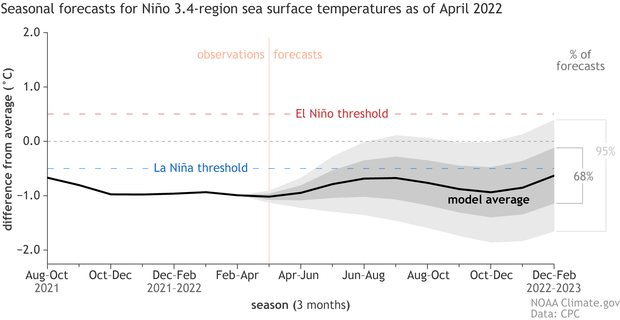 We will have to do a a bit more digging to see if there's any pattern that can verify that however. For now, I've attached the graphic above for the seasonal forecast for the status of ENSO through the next several months.

The PDO Plays a Part Too...

The PDO plays an important part in any outlook over the next few months. We've been in a negative phase for quite awhile now and negative phase usually exacerbates drier conditions for Colorado. There are, of course, a few other circulations at play but the Pacific Decadal Oscillation can have a significant impact on our longer term weather setup in Colorado and the Western U.S. With this in a negative phase and expected to stay that way through fall - it gives us a bit more of a confidence boost that a dryer than average outlook is more likely for this fall. 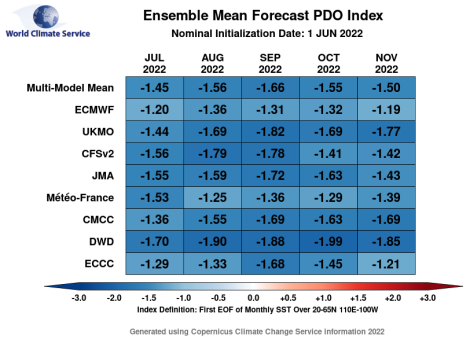 If you missed the section at the top of the page about long term forecasts and their accuracy, I'd recommend a quick read of that. What I will present here is not a "forecast" but more of an "outlook." I'm going to describe statistically what we are more or less likely to see for this fall based on modeling, forecasting, observations/circulations and a bit of my own forecasting magic.

Those looking for "finer details" will be disappointed, those won't be attempted here as they are just as likely to be wrong as they are right. In fact, if I were to stay something like, "I believe we will have monster snow storm the first week of November" my likelihood of being wrong increases quite a a bit.

Per CPC guidance, the entire state of Colorado has a significant probability that temperatures will be warmer than average through the end of November.

Again, I don't always agree with the CPC and I'll mention when and why I don't but I am in pretty good alignment with what they're showing here. It coincides with what we typically see in La Nina falls across Colorado - the rule with temperatures is we tend to start fairly warm followed by cooler conditions a bit later than average in the season. That's not always the case though, last year we had one of our earlier snowfalls and it was a La Nina year... but remember weather like that is the exception rather than the norm with these types of patterns.

If we look at the Euro long range ensembles it matches up with the above as well...

Some of the other ensembles have a very similar pattern; the GFS actually has a stronger ridging signal for the Western U.S. which when taken with other models means we have a bit better confidence of this setup.

Expect Fall 2022 to be warm across Colorado - this doesn't mean we will see no cooler days... it just means that when we take all the days for the next 3 months and average their temperatures out it will most likely be above average. If the models are showing a strong enough signal, temperatures could we significantly above average. We will have to keep an eye on the shorter range, week-to-week forecast details and see how things turn out.

More good news (sarcasm...) it's looking likely that Colorado will see BELOW AVERAGE precipitation through the fall season this year.

Similarly to the agreement we see in the models for temperature outlined above, we see agreement in terms of precipitation as well.

The precipitation outlook also mimics what we "typically" see during a La Nina fall for Colorado. Dry conditions are expected across much of the United States but the middle parts of the country really have the best shot at being the driest areas.

The Euro Ensemble is attached again below... 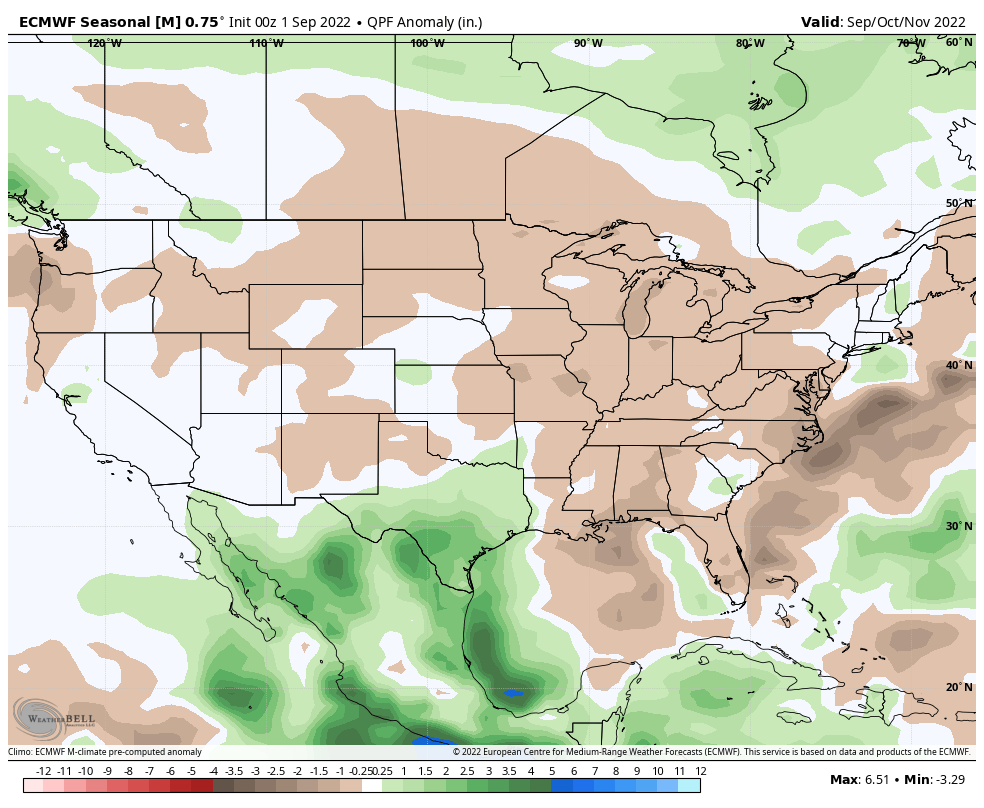 The devil is in the details here for Colorado however... September is one of our driest months with October not too far behind. This means it only takes one storm system dropping even a moderate amount of precipitation to bust a dry outlook like this. This makes our confidence in the "dryer than average" part of this outlook fairly high, but the wildcard is that one rogue storm system or front that catapults us above average.

As well and good as that all sounds - the odds are in favor of a dryer than average fall.

Other Weather Phenomena to Watch For

These are not forecasts or mentions of specific details or times. During setups like we are expecting this year, the below is some of the stuff we typically see more or less of.

There we have it, our outlook for Fall 2022 in Colorado. Please remember, dryer than average doesn't mean we see NO snow or rain at all, it just means we see less than average for the period of the next 90 days. Same with temperature, above average doesn't mean we see NO cooler days... For more information on all of that, keep an eye on the shorter range forecasts... I'll keep you ahead of anything interesting that pops up.

If you are a site supporter, thank you so much for your support of this site! You will be reading this by early September as a thank you!

For all other site visitors, I also appreciate the support. This article will be available to those folks on Astronomical Fall on September 21. 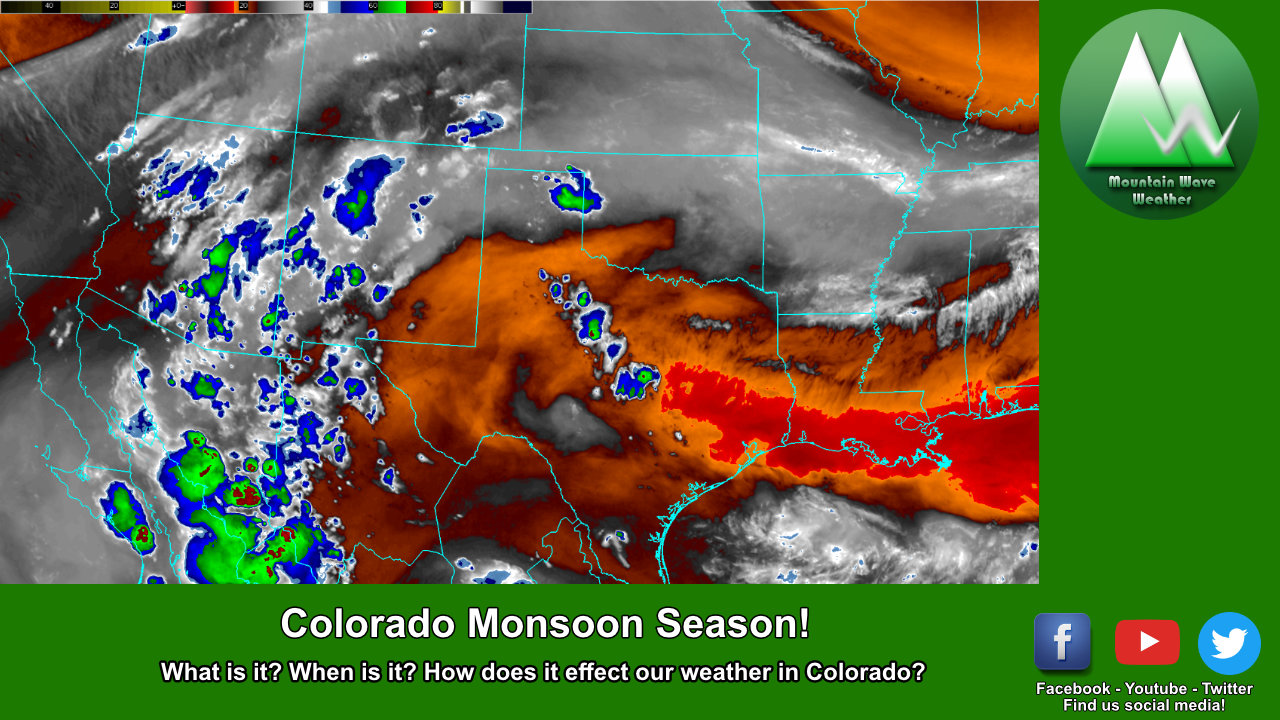