Current drought conditions for Colorado as of March 8, 2018

The latest release by the U.S. Drought Monitor kept most of Colorado in some sort of drought status, the biggest change was that areas of moderate and severe drought began to creep North towards the central and Northern part of the state. The latest high plains update mentions deterioration  of conditions in areas like Texas, Oklahoma and Kansas along with Colorado.

Southern parts of the Plains (above central Texas) experienced another week with little or no precipitation, prompting large-scale deterioration across the Texas and Oklahoma Panhandles, northeastern New Mexico, and central and western Kansas. This results in a broad area of D3 (Extreme Drought) as noted in the South region write-up, with D1 (Moderate Drought) and D2 (Severe Drought)areas also expanding northward through parts of central Kansas.and east-central Colorado

How Did We Get Here?

To put it simply, fall and most of winter were absolutely brutal for precipitation around Eastern Colorado. Many areas saw between 0%-20% of average precipitation for several months  in the fall and winter... November and December were particularly brutal. November % of average precipitation. Most of Eastern Colorado was below 30% of normal. December % of average precipitation. Most of Eastern Colorado was below 20% of normal with some areas reaching below 5% of normal It's not just the precipitation that's been giving us problems this year. Fall and early winter were extremely warm and that combined with the dryness experienced is why we are in our drought conditions today. Here's a look at the daily mean temperature anomaly for November and December; these maps tell us how much above or below average daily mean temperatures for the month finished: November 2017 was absolutely scorching for nearly all of Colorado. Below average snow and well above average temperatures are why our mountain snowpack never really got going this year. December, while slightly closer to average was still warm

Heck, we'll throw January 2018 in just to make the  point of how warm it's been this year: January 2018 was another above average temperatures month, surprisingly snowfall was close to average for many locations along the Palmer Divide.

Any Relief in Site?

The Climate Prediction Center's outlook for spring was released recently and paints a pretty abysmal picture for our drought conditions at least through the end of May. CPC says drought conditions likely to persist for Colorado at least through the end of May.

That's not to say we will see no rain and  snow at all over this period, it just means that if you take monthly precipitation we get from March through May it is highly likely we will end up below or well below average. This graphic is indicative of the pattern we are seeing set up over the next couple of weeks, areas like California and Nevada look to get decent amounts of moisture but a lot of that will wrap around to the North of Colorado.

Severe drought conditions haven't quite made it to the Palmer Divide yet, but it may just be a matter of time. Most of the area is currently under Moderate Drought classification

Models do show a couple chances at storms later into March (think after March 15) but given the overall weather pattern we are a bit skeptical about their ability to organize into anything substantial. We will keep a close eye on these storms in case any of them start to show promise.

In the meantime, enjoy the warmer weather and be careful with those fires and sparks! 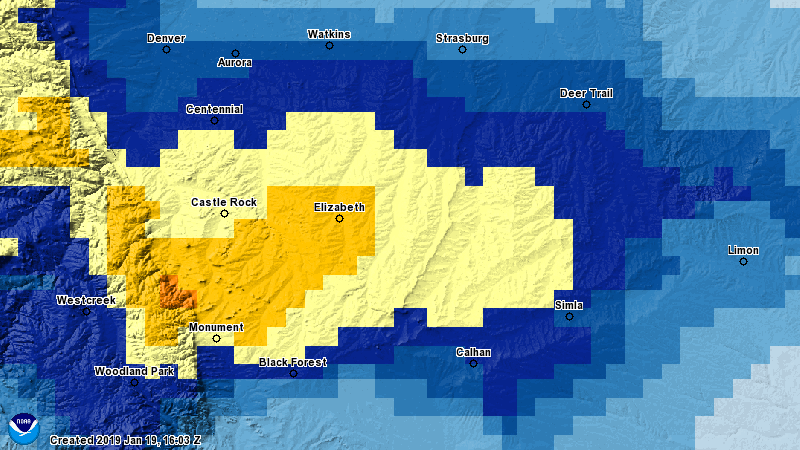